ASI received a contract from NAWCTSD (under the TSC-II Lot 1 contract vehicle) for the development, fabrication, and testing of modifications to the CH-53E and CH-46E APTs, Devices 2F171 and 2F172 located at the Marine Corps Air Station (MCAS) Futenma, Okinawa, Japan.

The purpose of these modification efforts was to increase full training system reliability and to reduce total life cycle support costs and obsolescence issues.

ASI is also providing improvements to the trainer to correct previous operational deficiencies and to provide new Visual System Databases. 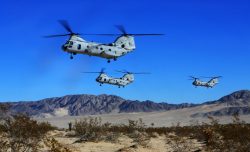