ASI built Japan their first ever E-2C RFTD. This was made for the OEM of the aircraft, Northrop Grumman, to deliver to the Japanese Air Self Defense Force (JASDF) as part of an aircraft package.

The complex RFTD function for this delivery was primarily aero-modeling. At the time, JASDF had both 4- and 8-blade E-2Cs in their Fleet. ASI was able to design a simulator which could easily change from one to the other aero-model and allow pilots to learn and preform aircraft procedures in each type without the degradation in training caused by incorrect blade element modeling.

After being accepted by Northrop Grumman test pilots, it was shipped to Japan and delivered, with training to the JASDF.  This device builds upon the successful E-2/C-2 RFTDs that ASI built and delivered to the U.S. Navy in Norfolk VA and Atsugi Japan. 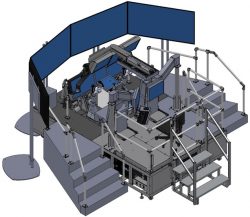