ASI received a contract from NAWCTSD to upgrade the Device 2F143 and 15E22C trainers and ensure they provide the performance characteristics, physical fidelity and functional fidelity necessary for training on the use of systems and changes as incorporated on the EA-6B aircraft by Block 89A Upgrade program and to replace the Digital Radar Landmass Simulator (DRLMS) in Device 2F119A.

The contract also included modification of the simulated electronic warfare radar receiver system and jammers to include new bands of coverage, modeling of new threats, and incorporation of the USQ-113/Connectivity Upgrade on the 2F119A and 15E22C Devices. NAWCTSD accepted ASI’s proposal to replace the existing hardware-intensive electronic environment simulation on Device 2F119A and Devices 15E22C with a digital environment generator, the Combat Electromagnetic Environment Simulator (CEESIM), resulting in greater simplicity of use, improved reliability and maintainability, and greater fidelity for the trainers.

The Block 89A upgrade included incorporation of a dual MIL-STD-1553 data bus architecture extending across both the 2F143 and 15E22C trainers, extending the CDNU functionality to make it primary Navigation bus controller, and making the Central Mission Computer (CMC) the back-up Navigation bus controller and the primary EW bus controller. It also included replacement of the GPS with the Embedded GPS/INS (EGI) system, plus addition of enhanced communication capability including USQ-113, connectivity, the AN/ARC-210 radio system, and Advanced Narrow Band Digital Voice.

ASI’s accomplishments included development of an Operational Trainer Program (OTP) for the CDNUs installed in the 2F143 Devices to enable them to tolerate freezing, repositioning, and slewing of the simulated aircraft.

ASI also received a contract from Lockheed-Martin Information Systems (LMIS) to participate as a key member of the Integrated Product Team developing the specifications for a completely new suite of trainers for the EA-6B aircraft. LMIS sought out ASI’s participation in this effort because of our extensive experience with the current EA-6B trainers. 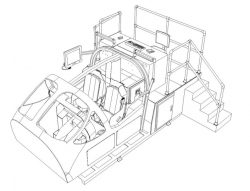